2018 has been a hot summer, but I had decided to get the A/C up and running again before the summer started. The center console transfers quite a lot of heat into the cabin, so even when it’s not high summer it’s actually a good idea to have aircon. The system is also used to cool the fuel line before returning to the fuel tank.
The A/C lost it’s charge in 2017, and as cars from up to around 1992 is normally born with R12 as refrigerant, this was also the case here. R12 has been banned for many years in Europe due to being an old-fashioned CFC freon, which has a Global Warming Potential, which is 10,000 times larger than CO2. The R12 charge on an XJ-S is 1.13 kg, and one charge thereby corresponds to the emission of 11.3 tonnes of CO2!
I investigated the possibility of finding a so-called drop-in replacement refrigerant and it is available: RS24. I just couldn’t find a supplier nearby. Instead I got in contact with a local refrigeration engineer who builds refrigerated vans and trailers, and he knew how to convert from R12 to a more modern refrigerant, namely R134a.

We had a talk about what could and should be done:
R134a has a slightly lower cooling capacity at same flowrate, and if you can’t live with a slightly reduced cooling performance, you should therefore install a new expansion valve with larger capacity. We decided not to change the expansion valve.
The working pressure of R134A is also slightly higher, and the charge is therefore reduced by 10-15%. The condenser and hoses must also be able to withstand the higher pressure.
I replaced the condenser as it had a lot of loose fins and thereby reduced cooling capacity. It turned out to be quite hard to find a replacement for a preHE XJ-S, but I found it at the small English company FENair, which makes A/C installations for agricultural machinery and fine old cars. Ferrari, Lamborghini, Aston Martin and also Jaguar. They also supplied the new filter drier, which must be replaced when you change refrigerant, but also if the /C system has been left open or has been at zero pressure due to leaks.
The condenser was not 100% plug and play, but that was not a big surprise. I had to make up new top brackets. Actually the old condenser wasn’t fixed at all at the top end. 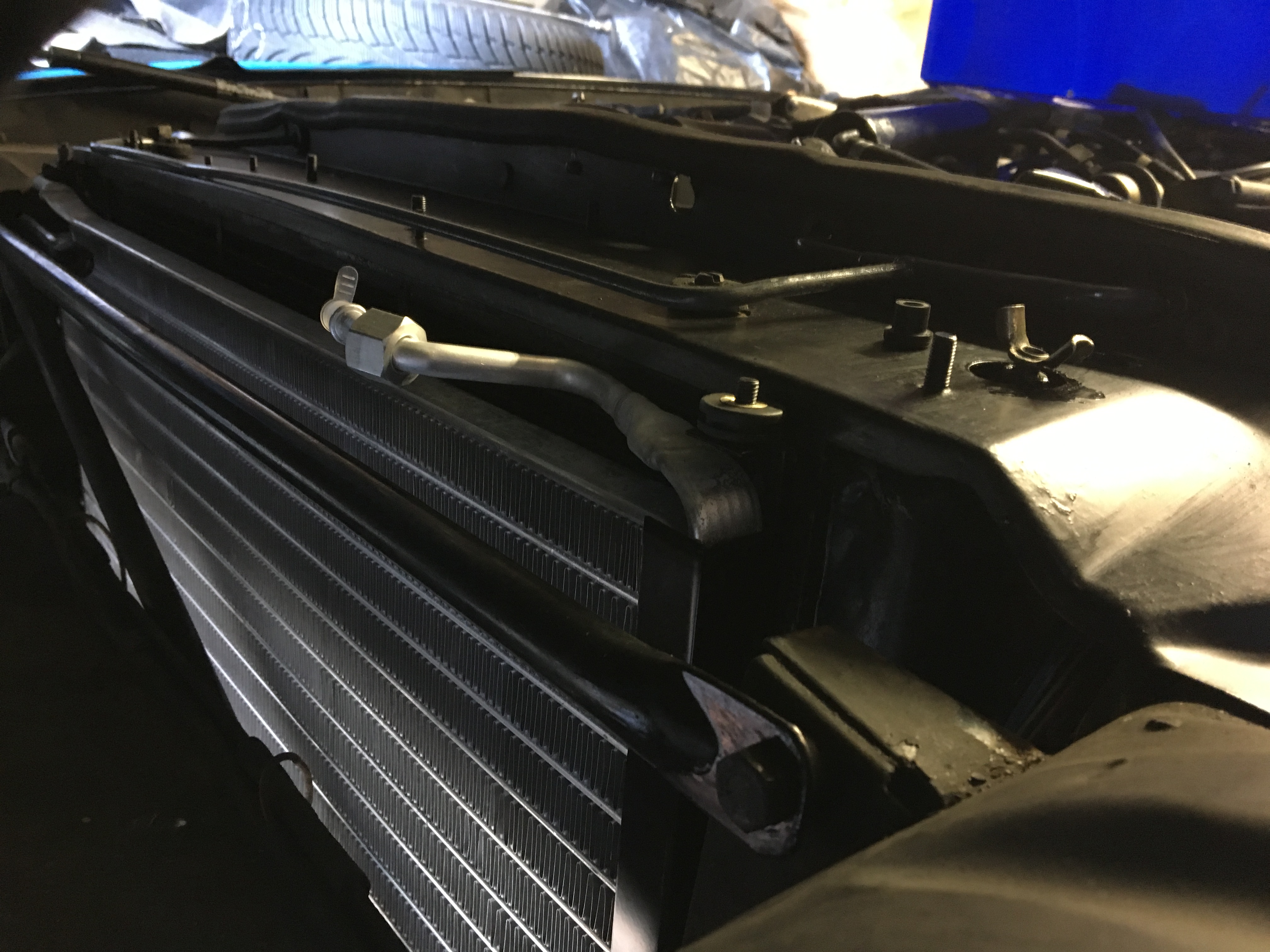 The A/C hoses are not pretty, but they are a solid design and the refrigeration engineer estimated they would easily do at least 10 years more, so they were left undisturbed.
The main difference in CFC as R12 and HFC as R134a is that they cannot use the same oil. R12 uses a mineral oil, but the R134a simply cannot transport  the mineral oil through the system to lubricate the compressor.
The oil for R134a is synthetic and is called PAG.
To do a proper change to R134a, all mineral oil shall be flushed out. To get a good flow through the evaporator the expansion valve is detached from the the system and replaced by a section of hose during the flushing. 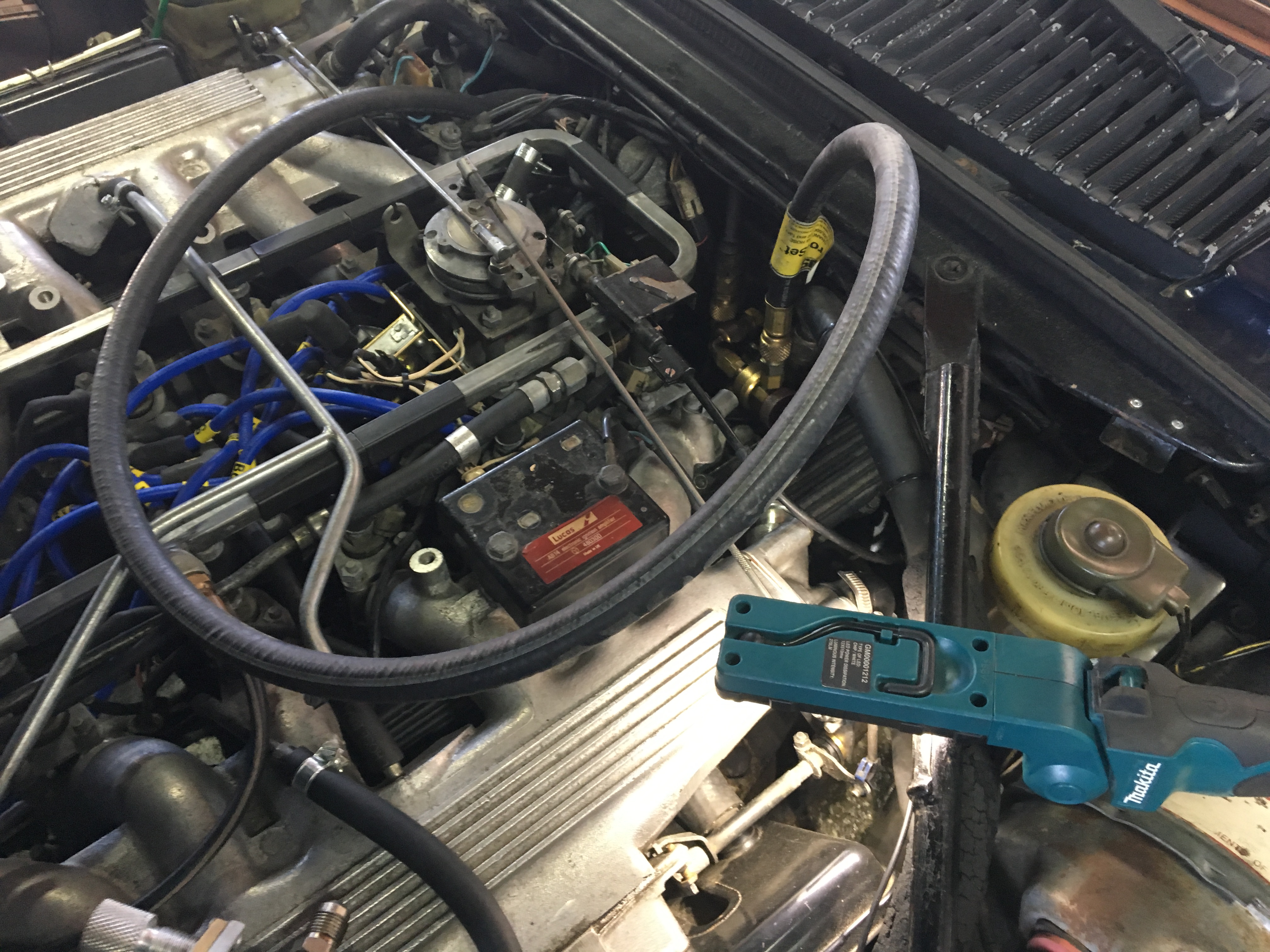 The old heavy Harrison A6 compressor was in the meantime removed and flushed manually while rotating it by hand.

The flushing of the cooling system took 3-4 hours, but didn’t require any attention meanwhile.
The necesarry oil volume was still readable on the original labels on the compressor: 280ml. The compressor took 100 ml, the remaining 180 ml should then be charged together with the refrigerant.
The service ports was changed to the red/blue type to indicate for future mechanics that the system is now filled with R134A.

The final pressure test unfortunately showed a small leak in the compressor, so new rear end o-ring seals were ordered and mounted. 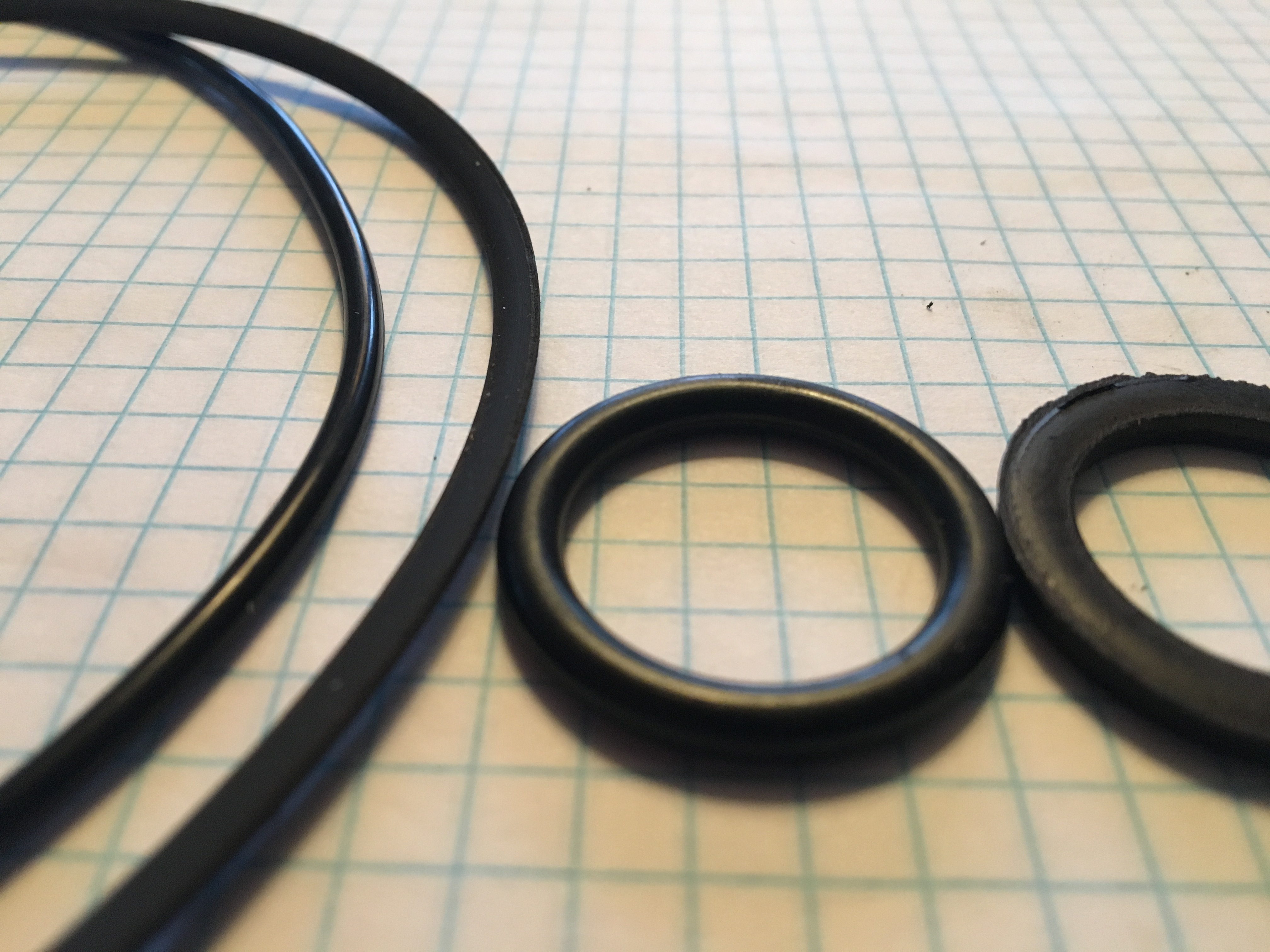 From here it was straight forward: A/C system pressure was pulled down to a vacuum, and then first the remaining oil and then refrigerant was sucked in by the low pressure, and then the A/C was up and running again !

How does it work –  Cooling system function

An aircon system consists of a few components:
The evaporator is a heat exchanger, that is located where you want the cooling to take place. In a car that’s in the heating system in the dashboard. It takes energy to evaporate a fluid. This means that you can absorb energy in the air passing through the evaporator by getting liquid refrigerant to evaporate inside.
The compressor compresses the evaporated refrigerant gas, that comes from the evaporator. The gas gets warm during the compression.
After the compressor, we therefore have hot gas under high pressure. This gas is cooled in the condenser, which is the second heat exchanger (radiator) in the system. The air passing through the condenser is heated and the refrigerant is cooled down. Due to the high pressure, the gas condensates and becomes liquid.
After that, the cooled refrigerant passes through the filter drier, still under high pressure. The filter drier catches dirt and acts as a small buffer.
The cool, high pressure liquid continues to the expansion valve, which in its simplest form is just a small nozzle. Here the pressure drops, meaning you now have a fluid under low pressure.
Low pressure refrigerant evaporates easily, and that is exactly what happens, when it enters the evaporator. The bypassing air gets cooled down, and another cycle starts