2½ week of travelling in the XJ-S in Normandy and Southern England.
I guess it doesn’t get a lot better for a Jaguar petrolhead. Imagine you lean back in the low and light seats of an early XJ-S with the V12 humming remotely, while you have a light grip on the large, old, thin leather steering wheel with your right leg leaned against the warm centre console. Mix that with a light smell of almost completely combusted high octane fuel without any catalysts to reduce anything, and you will have an idea of the ambience in the cabin.

The preparations for the trip included pulling the front axle and replacing all bushes, stub axles and wheel bearings. I took the opportunity to clean and paint all suspension parts, and that should later turn out to be causing problems. I finished this job shortly before departure and only got to drive 200 km before heading south.

The obligatory 1½ hour queue at A7 in Hamburg at 30-35°C was a tough start. The temperature gauge was climbing towards too hot, if I didn’t keep RPM at around 2000 when stationary, so that was how these 10 km was done. I’m sure the other users of the Autobahn became slightly annoyed, but burning a few liter fuel extra must be a better option than stopping and blocking the road.

After the tunnel the road was quite open, but when we reached 130 km/h vibrations put a limitation on our pace. First night was spend at a hotel in Oberhausen in Ruhr and in the evening I did a little research on wheel bearing adjustment, as I was quite sure that excess slack in the bearings was the cause. The next morning I tightened them up at the hotel parking lot and it helped.
However, the issue still wasn’t solved until I few days later also tightened the lower shock absorber bolts. They had become loose, most likely because paint had been worn of the joint faces and thereby reducing the bolt tension.

We love France, and it was great to visit a new region. Compared to England there were significantly fewer paid parkings at the attractions. Bayeux and Mont Sant Michel did of course have paid parking, but most of the D-day beaches and smaller villages could be visited without having to find coins for the parking. Both the traffic and the weather was mild.

We took the ferry from Cherbourg to Poole with an overnight stay on the ferry. It wasn’t more expensive than other accommodation options, and you can just as well be transported while you sleep.
The horn centre dropped of the steering wheel while rattling along on the ribbed ramps. That explained the mystery screw I found on the carpet in the car before we took of from home.

The first target in England was to participate in Jaguar Drivers Clubs National Day at Wroxall Abbey on Sunday. We found a hotel at Leamington Spa, which by coincidence also housed Jaguar’s Quality Development Center. However, they were not responding the door bell when we wanted to talk about our experiences.
I knew that XJ40.com had their annual meeting in this area on Saturday. When I checked the actual location, it turned out to be the British Motor Museum in Gaydon only 5 miles from our hotel, so on Saturday morning I took of to say hello to the lads, while Anne-Marie had a morning on her own. The best part of that event was, as usual, to go out for dinner on Saturday night, and here I brought Anne-Marie. Saxon Arms do hereby have our recommendations !

On Sunday we went to JDC’s National Day. It was a big venue and actually a bit boring. However, well over 500 Jaguars attending meant that there was plenty to look at, and we had a good day out in the sun.

From here we headed for Dartmoor. We like to see  interesting places when we are nearby, so Hampton Court, Blenheim Palace and the Uffington White Horse were visited before and after this Jaguar-themed weekend.

Dartmoor is really nice, and it was good finally to get out on some properly small roads. Driving on singletrack roads with 2-3 meter high hedges passing very close to the wing mirrors is just so English and charming. By the way, these hedges are often quite solid rock rather than a compliant hedge, so distance must be kept, even when the oncoming traffic seems not to be giving you the needed space.
We stayed in Lydford, which turned out to be a place, that had been visited by ‘marauding Danes’ in the year 997. The natives were friendly nowadays, so we had some excellent days at Castle Inn which is a real traditional inn with lots of guests in both restaurant and pub.
We climbed a couple of Dartmoors Tors on foot and patted a few wild (?) Dartmoor ponies through the car window. The weather had now started to be more like the weather forecast, which was not very good. Until now the weather had been constantly both warmer and drier than predicted.

A storm warning had led to cancellation of a huge festival at Newquay. Maybe that’s why we were able to find accommodation at a great price in the city center. Shortly before we reached our B&B we visited a KwikFit and had our A/C recharged for quite a reasonable price. A V12 generates an impressive amount of heat, and much of it finds its way into the cabin, so you do not want to drive it on longer trips without functional cooling.

We were going to see Lands End no matter the weather, so we headed west. We did however not get far before we had a flat front tyre. I had been on a curb 1-2 days before, maybe it had damaged the tire. We trundled a few hundred yards on the flat tyre to get off the road and after that no-one would be able to see why it was punctured in first place.
I made a few phone calls and found out that the closest place we could get new tires of the correct size with V-rating was at Vintage Tires at Beaulieu/Southampton on the way back to the continent, so we got an appointment there the following Monday.

Lands End was a nice place, and an average windspeed of 17 m/s doesn’t make it any less charming. From here we drove a little up the coast and visited Geevor tin mine. It was out here mining and thus the background of the industrial revolution started. We ended the day with a visit to Lizard Point, which is the southernmost point of England. Here, there were onshore winds, and there was for sure lots of salt in the air. It was good to know at least the front end of the chassis had been waxed before departure.

The rest of the time in Cornwall we went around a bit randomly, allowing ourselves to be surprised by small fishing towns, nice roads and fun places. We recieved a lot of thumbs up and comments like ‘Nice car’, and in many places the XJ-S was the ticket to conversations with strangers. We met more old cars in Cornwall than elsewhere, but still not many, and a worryingly large part of these were air-cooled VW, especially T2 vans. Do old radiators, water pumps and cooling hoses actually keep many from using their classics on long trips ??

4 new Avon CR28 205/70R15V and not least a balancing meant that the car was now driving as it should. The shock absorbers eventually became completely ineffective, and the old front springs sagged even more and caused the front end to become very low, so we still had to drive according to the conditions.

We picked up our oldest son in London and had him as passenger for the rest of the trip, We had a few days together in London and Brighton.
The bad weather forecast for the final vacation weekend made us take the ferry to Calais late Friday afternoon. The plan now was then to drive as far as we felt like and then find a Gasthaus, but as the XJ-S is such an excellent GT that we ended up not stopping until the next morning at 5am in front of our house. We had light rain all the way home, but thankfully both wipers and lights are actually usable on an XJ-S despite it being a pretty old car.

We used 788 liters of Premium to cover 5870 km. That’s 21.3 MPG (UK), 7.55 km/l or 13,25 l/100km.
We had our share of technical issues, but on the positive side, we also had a lot of things that did not fail. Not a single blown bulb, and all the electronics kept working. An XJ-S is complicated compilation of oldschool, analog mechanics and electronics. When most of these components are 42 years old, every mile is exciting, but it is at the same time also the fascinating part of driving it. I probably would have been bored in an old, simple, aircooled T2 ! 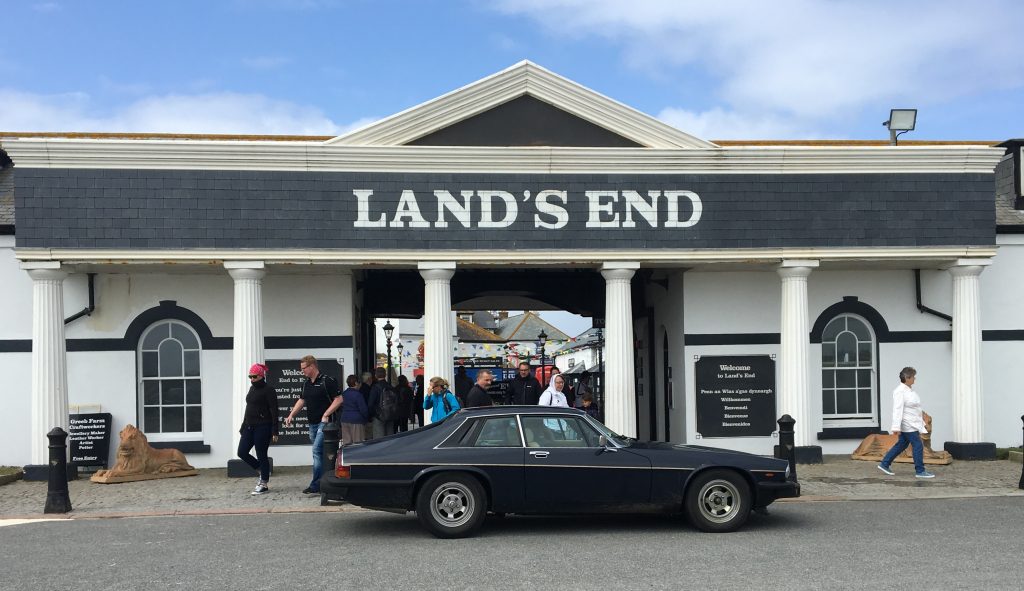